How does the laser cutting machine work?

The need of a machine that can cut in a precise and contactless way details is the main reason for the creation and popularization of laser cutting machines. 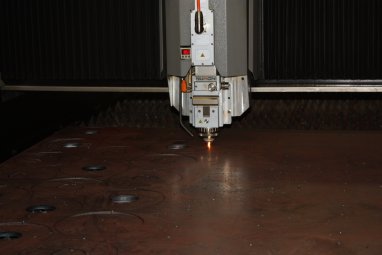 What is the process of laser cutting?

It’s a well-known fact that the word „laser” is an abbreviation for „increase of light with stimulated radiation emission’’.

Put simply, light particles (photons) are stimulated by electricity that generate energy in the form of light. This light is streamed in the form of a beam and it forms a laser beam.

The process “laser cutting” works with a precisely focused laser beam that passes through the material that is being processed. The beam doesn’t cut but it melts the material, which means the machine for metal cutting can be used not only for cutting metal but also for processing materials such as fabric, leather, gemstones and other.

How does the laser cutting machine work?

To understand how exactly a laser cutting machine works we need to first learn about its mechanism.

The main components of this type of machine are:

When the processed material is put on the “bed” the cutting head with the laser knife starts to move on it around X, Y and Z axis. Because the movement around the axes is controlled by servo motors, the laser knife moves and processes the material in a very precise and fast way. This gives the impression that the laser knife “floats'' over the object that is being processed. This principle of work is called OpticsLaser.

The distinguishing feature of the laser systems that are offered on the marketare the integrated laser transmitters they work with. The type of the used laser has a big importance on the function of the laser cutting machine. 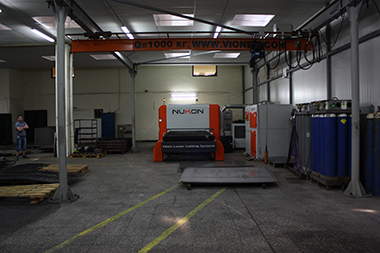 In gas cutting , also known as СО2 laser cutting carbon dioxide is used that is stimulated by electricity. These lasers are usually with a wavelength of 10,6 μm and they are suitable for processing non-metal materials. СО2 lasers have a high level of power and offer good quality of the beam which makes them one of the most preferred types of lasers in medicine and production.

Optic lasers are in the group of solid-state lasers. These lasers generate a laser beam with the so-called seed lasers and amplify it in a special built-in steel wool that gets energy from a pump diode.

Fiber Optic lasers have a wavelength of 1.064 μm. and have a very small diameter of the focus. As a result of this the intensity of the laser beam is 100 times bigger than this of the СО2 laser with the same generated power. One of the biggest advantages of optic lasers is that they don’t need maintenance and their life-span is more than 25000 hours.

The biggest disadvantage of these lasers is that their pump diodes are very expensive and they need to be replaced at every 8000 to 1500 hours of laser work часа работа на лазера.Besides the crystal itself has a shorter life-span compared to optic lasers.

We have reviewed the different types of lasers and understood how the laser cutting machine works. But what makes this machine better than the other types of machine equipment that is used for cutting materials?

Laser cutting machines have some big advantages compared to the other types of machines, such as:

One disadvantage of laser cutting machines is that they are not suitable for cutting materials that reflect light such as copper, aluminum and other.

Main techniques that can be performed by laser cutting machines

As has become clear laser cutting is the operation laser cutting machines offer. It’s used for the production of elements/details in different shapes and sizes.

Engraving is a process in which a layer of a given material is removed. This process is usually used for engraving different products, placing barcodes, engraving plates, jewelry, keyholders, etc.

Laser marking is similar to engraving with the only difference that engraving offers a more deep removal of a material’s layer than marking.

Laser punching is a process in which the surface of the processed material is completely punched. 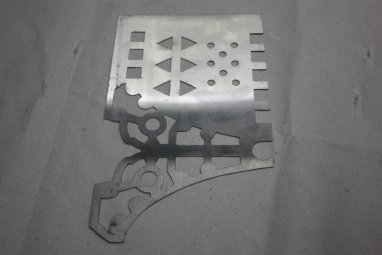 Although laser cutting is considerably new technology, the concept of working with a laser is not new. In fact, the idea appeared for the first time in 1900 when Max Planck published his conclusions about the relation between the frequency of emission and energy.

These conclusions inspire Albert Einstein to develop his concept for stimulated emission and the principle of handling the energy generated by light.

In 1940 a group of engineers worked intensely on Einstein’s idea and searched for ways to use light’s photoelectric effect. And in 1960 Theodore H. Maiman created the world’s first working laser cutting machine.

The first laser created for production purposes was presented by Western Electric in 1965. The company used the laser machine to punch holes for the purposes of its production.

Just two years later in 1967 the German scientist Peter Holdcroft developed his own laser machine that worked with a СО2 laser beam and auxiliary oxygen gas. Holdcroft used the machine to experiment in the sphere of production cutting and his experiments helped him use a laser cutting machine to cut a steel sheet with a width of 1 mm.

Soon after Holdcroft’s success Western Electric showed interest in his creation and started to work on it. Therefore the company improved the technology created by the German scientist and started production and trade with laser cutting machines designed for the production sphere.

In 1969 Boeing company published a special report in which they discussed the options for using laser cutting for hard materials such as ceramic and titanium. In the report they stated that laser cutting has the potential to become a main tool for the needs of the production sphere.

This report gave the start of the wide popularization of laser cutting machines in production and the development and improvement of laser technology.

Since the advancement in technologies in the 90s laser machines are constantly being improved.

Today laser cutting technologies have integrated computer-based systems for programming that allows full control of the cutting process.Thanks to all new developments and modern applications laser machines can create different shapes and components without deformation which makes them ideal for use in different industries such as car production, electronics and medicine, aviation, astronautics, art and other spheres.

METAL IN Ltd was founded in 1985 with main activity is the manufacture of various metal products of alloy steel, stainless steel, brass and aluminum. After 1999 the company orients its activity to the manufacture of metal products, parts and components from sheet and solid material and pipes of various types of steel as a subcontractor of European companies. Currently 80% of production is supplied to companies from France, Holland, Italy, Germany and Austria. In the course of development METAL IN Ltd increases its competitiveness. In production are introduced modern high-tech machinery that enables the supply of high quality products at competitive prices.